The Tale of a Gay Rooster

At Evening Shade Farms, we occasionally raise a few chickens to restore the flock.

The process of incubating takes about 28 days. A few, hopefully fertile, eggs were gathered and in 28 days we had some baby chicks. It takes a few weeks before they are big enough to merge in with the rest of the chickens.

Two of three roosters we introduced to the other chickens were, the twins, Mr. Rooster; Shorty, a pretty color of brown and black and the other rooster, Betty White, was mostly white with some black. All good looking roosters. They were brothers, we thought! 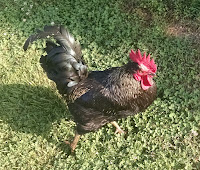 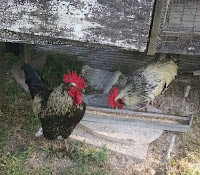 Things went along pretty good for a while, then we noticed, as sometimes happens when you have too many roosters, competition for the hens causes problem for the hens and the others too. 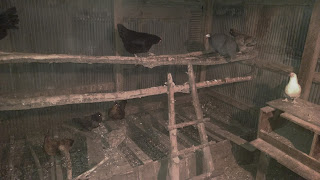 There were 3 rooster that seemed to be causing all the problems; Mr. Rooster, Shorty, & Betty White. They were bigger than the other roosters so tended to dominate. We decided to move them from the farm to the Evening Shade Farms Soap House area. We had built a smaller chicken house near the Soap House, so there was a place for them to roost. The door came from an old chicken house that we took apart. 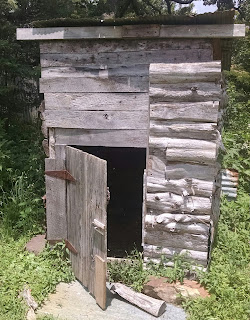 For a couple of months things were going good and the three rooster brothers traveled around together and were very friendly with each other and us. Then one day we heard a ruckus on the front porch of the soap house. When we looked out to see what was going on, we found that the Betty White was in a wood box on the front porch of the soap house and Mr. Rooster, the larger of the twins, was doing the 'hen lay an egg crow'.

To give a little background about the box: we had a banty hen, named Betty, who laid a some eggs during one winter in that box. None of those hatched, but she was successful on later tries. She was a good sitter and a pretty brown. Unfortunately, she disappeared one day. We live in the country and there are a variety of predators around. 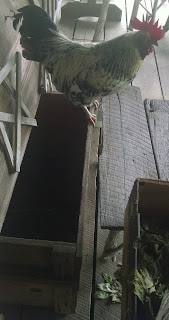 Anyway, what we figured was that Betty White rooster was pretending to be a hen and Mr. Rooster thought Betty White was going to lay an egg, thus the 'egg laying cackle'. (We think that they could tell that a hen had been in the box.) This happened several times, and we wondered what would happen if we put a fake wooden egg in the box.

We figured that Betty White rooster thought a hen had laid the egg, even though there was no hen other than him pretending to be a hen, and because of that he needed to keep the other suitors away.

Not wanting the three brothers to be apart, we removed the egg and covered the box so they could not get into it.

That night, Betty White & Shorty slept together in their chicken house with no problems and the next day were back to normal. We then move Mr. Rooster back up to the chicken house to be with his brothers the next night.

Since then, they are back to being brothers and traveling around together with almost no fighting other than what is normal for three brother roosters being together.

We enjoy their company and they love to eat bugs and mulberries and crow a lot.


Posted by soaphousenews at 2:20 PM No comments: 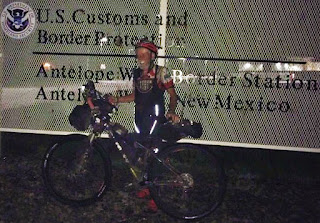 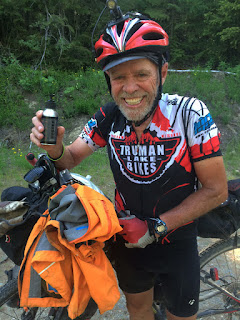 
Cyclist, Hal Russell, a 66 year old Living Legend has once again said, “No, Thanks” to the myth of age, by completing the world's hardest and longest mountain bike race, The Tour Divide.

2,745 Miles of hard rock challenge that can push one to over 11,000 feet in the sky and dip-down to where they breed hoards of mosquitoes that can be seen from a mile away.

They say heroes are made by the paths they chose, not by the powers they are graced with. Hal Russell choose his path and stayed with it for 28 Days, 2 Hours and 15 Minutes.  The power that stayed with him throughout was his ability to finish, even before he had ever started.

Evening Shade Farms, a team of organic body care product entrepreneurs and cycling enthusiasts, are extremely proud to co-sponsor Hal Russell, this gentle giant of few words...has a proven smile
that overshadows even the most difficult times.

Evening Shade Farms, was also on The Tour with a lot more than a BUGZEE jersey...we were the THE BOMB Organic Lip Balm, which helped soothe and avoid painful irritations.

We were the Eco-safe BUGZEE Organic Insect Repellant...that did the job that DEET couldn't...
and did it safely.

As for the seat of all cyclist problems, Evening Shade Farms has stepped-up to the plate with two glide-by hits:

First, THE BOMB LiveWire Organic Body Powder, powdered silk that absorbs the heat is a good way to describe it.

And Second, THE BOMB Organic Anti-Friction Chaffing Stick...pretty slick...second to none, like Hal Russell...our Organic Bomb.

Hal's dream ride: Vietnam once again. This time to cycle across the country on his Trek Superfly.
Posted by soaphousenews at 9:13 AM No comments: 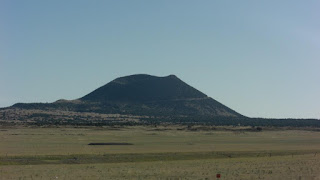 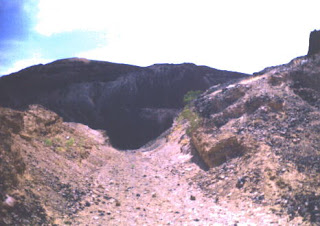 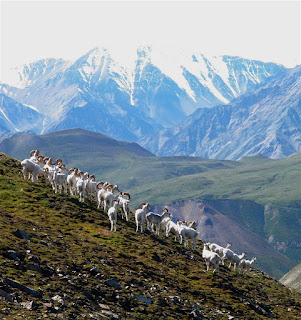 Hal will be going by Black Mtn, an old volcano that has been dug out for the volcanic rock and Sheep Mtn. today.

86 miles to Silver City, then 100 miles to Antelope Wells, The End of the Tour Divide Race

Posted by soaphousenews at 9:18 AM No comments:

Hal got his piece of pie in Pie Town, NM yesterday. Today he will have a great view of the privately owned Alegres Mountain, 10,00 feet, and The Mangas Mountain, 9,600 feet, on his way, 169 miles, to Silver City, NM. Then about 80 miles to the Finish, Antelope Wells, NM, on the border of Mexico.

Rain,before they arrived, has made roads muddy and makes for slow and messy going.

Posted by soaphousenews at 9:07 AM No comments: 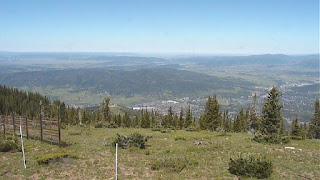 Hal will be headed 20 miles to Torreon, NM, then 40 miles to Pueblo Pintado, NM, and South to San Rafael, finally to Pie Town for a free piece of pie, 197 miles from Cuba. Weather looks good.
Posted by soaphousenews at 9:15 AM No comments: 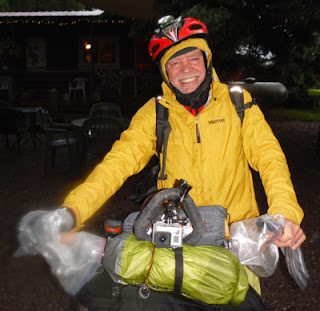 Hal is headed to Cuba, no not the Island, but Cuba, New Mexico. He is probably riding in some rain, but should run out of it before he arrives in Cuba, however, he has stopped for the night maybe.

43 miles to Cuba, then 70 miles to Torreon, NM, tomorrow.
Posted by soaphousenews at 7:59 PM No comments: 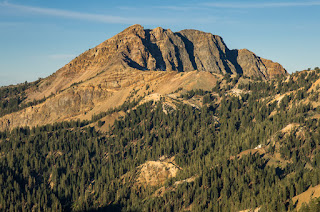 Hal will ride by Broke Off Mountain

Did they get to see any fireworks from up high?

We still don't know the status of Jake at the CO-NM border. He could have lost his GPS.

Posted by soaphousenews at 8:56 AM No comments: